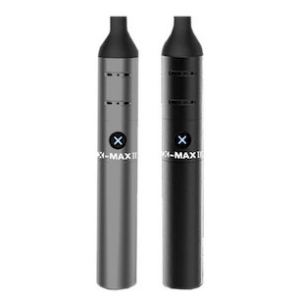 The XMAX V2 Pro is one of the budget-friendly vaporizers that will enable you to vaporize three different types of materials. The simple vaporizer from Topgreen can vaporize concentrate, waxes, and up to 0.3grams of herbs at a time. Powered by a 2600mAh replaceable battery, you can vape for around 45 minutes and get an extra battery to extend your sessions anytime you want. Furthermore, considering its features, it is effortless to use and quite portable.

XMAX is a series by Topgreen; they are known for efficiency and affordability. Just look at the vaporizers that they produced; the desktop XVAPE Vista Mini, the portable XMAX Starry V3, and the dense cloud machine XVAPE Fog. Each of these vaporizers is unique and has perks; the same goes for the XMAX V2 Pro.

The V2 Pro houses all of its features in a sturdy casing that doesn’t get too warm while protecting the device from falls and mishaps. Besides, it has the settings printed on the side with the LED lights as an indicator. With no bright display, this vaporizer is quite discreet. On top of that, it has a one-button operation for simplicity.

One Button Is All You Need

Meant for someone new in the vaping scene, a budget vaporizer like the V2 Pro is vaporizer would be pointless if it is complicated. As mentioned before, it has a single button that controls every aspect of your device. To turn on the device, press the button thrice. Then, hold the button down to set the heat settings and release it when the LED is next to your desired temperature. Press it three times again to turn it off. Otherwise, enjoy an entire 5-minutes session as it turns itself off.

First, a vaporizer with a user-replaceable battery is a perfect feature. It allows you to swap a fully charged battery to extend your session and change the battery when it gets faulty instead of getting a new device. Even high-end vaporizers like the DaVinci IQ2 or the Arizer Go has this feature. The XMAX V2 Pro battery will give you about 45 minutes per charge, and it takes 2 hours to recharge using the micro-USB charger included.

The XMAX V2 Pro uses an industry-standard ceramic oven to produce fresh vapor at the press of a button. It has decent temperature flexibility that spans the normal vaporization range suitable for all materials it can vaporize. The five different presets it offers are as follows:

In the following video, you can see the feature of the XMAX V2 Pro.

What’s In the Box?

Free shipping to USA on orders over $99