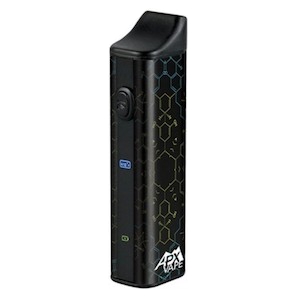 The Pulsar APX 2 is a great budget option for those that are just starting and suitable for those that need that extra level of comfort. The herbal and concentrate vaporizer doesn't cost much and certainly gets the job done. It's been a decent improvement over its original, Pulsar is making strides to improve while not completely reinventing the wheel.

The Pulsar APX 2 is an update to the Pulsar APX, with the most prominent transformation seen on the controlling interface. Featuring the convection vaporizing method, the APX 2 utilizes a ceramic heating chamber and has the same five temperatures as its predecessor.

Refining a Classic
Long-time users of the Pulsar APX are probably wondering whether or not they need to drop their old unit for the new version. The 2nd version of the APX acts more like a refined version of the original. But there is value to be found with both devices. The APX 2 does provide haptic feedback alerts for when your device reaches top temperature and when it shuts off- a welcome change from the original. On top of that, the new APX 2 comes with a tank for concentrates while it is much more focused on vaping dry herbs and can provide a more robust experience for one material rather than divide its efforts between the two.

Simplicity, Defined
One of the keys to the success of the APX 2 is the high level of simplicity in the design. The chamber capacity is smaller, and the device is focused solely on dry herbs. Another innovation in simplicity for the APX 2 is the silicone screen that replaced the much more standard stainless steel version on the original Pulsar APX. This new screen system is removable and infinitely cleanable, keeping a new user from having to replace a finicky metal screen with regularity. Not only that, but the silicone screen keeps the mouthpiece from becoming too hot and burning the user.

Pretty, powerful and petite
The APX 2 is powered by 1600mAh battery that lasts for about an hour and a half of actual vaping time. It has a new and improved button that feels much more reactive and long-lasting than its predecessor. The outside casing, in general, has been revamped, giving the device a better finish and a sturdier protective layer. In general, the user interface is the most improved aspect of the APX 2. Stands 4 inches tall, it can fit in any pocket with ease and can even be customized to fit your style. The APX 2 comes in many shades, including: black, gold, blue, silver, skull, tie-dye, wood, and one model that comes with an artistic rendering of the THC molecules.

Hot chamber
The APX 2 uses a sophisticated combination oven that utilizes both convection and conduction in a hybrid setup. It provides the best of both worlds. Showcased by the exceptional 30 second heat-up time with the maximum temperature of 428°F. The oven is built with the single user in mind, holding a condensed load of just 0.3 grams with five preset temperatures. These are the following: 356°F, 374°F, 392°F, 410°F, and 428°F.

Take a quick look at the design of the new Pulsar APX 2. It’s hard to get a grasp on just how compact this device is. Pay close attention to the new and improved silicone screen.