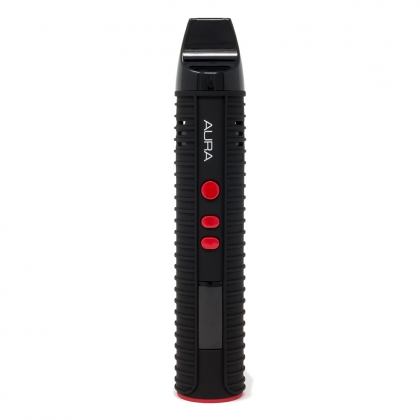 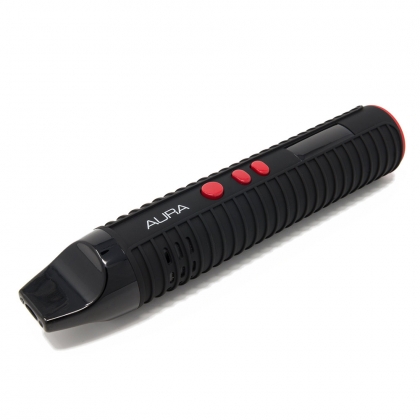 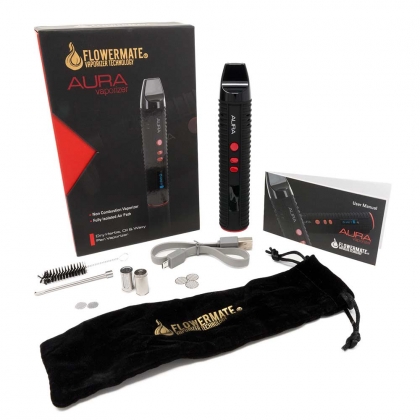 The Flowermate Aura is one of the smallest options available in the portable vaporizer market. It features a dynamic tank switching capability that allows users to vaporize herbs in the dry ceramic chamber and concentrates in the cotton-equipped wax tank. About the size of a magic marker, the Aura features a revamped airflow system and a digital display. A Flowermate Aura is an option that demands your attention.

Flowermate has made its name on value-oriented designs that provide entry-level consumers an opportunity to enjoy high-quality vapor. This time, they’ve released the Flowermate Aura, a portable vaporizer pen that emphasizes portability. Due in part to their renewed airflow system, there is no possibility of combustion and that the device provides 100% pure vapor. Thanks to their conductive heating system that limits the heat of the vapor that reaches the user. Overall, the vapor has a clean flavor despite the plastic housing. This device has a solid feel and even comes with a digital display to help keep tabs on your vaporizing temperature. The Flowermate Aura is one of the stealthiest devices around and still manages to pack a lot of power into a small package.

For being the same size as a marker pen, the Flowermate Aura packs in a lot of power. It comes with an isolated air path, meaning you will only ever taste your herbs. Flowermate went back to the drawing board with this product and came back with an air path system that features “7 Airflow Jets” for efficient and urgent extraction. Both the jets and the included chamber are larger and more sturdy than those found in the original Flowermate. All of the airpath components are located away from the technical innards of the Aura, like the battery and other electronics.

Flowermate had the foresight to include two different chambers or “tanks” for vaporizing either herbs or concentrates. The advantage here is that you don’t have to deal with the messy business of using one chamber to load both your herbs and wax/oils. The wax tank includes a built-in swab of organic cotton that easily adheres to your concentrates and cuts down on waste and mess. Both of these chambers can be pre-filled and brought with you so that you don’t have to load your device in the open. Again, the primary focus of the aura is portable convenience.

When they say 2-in-1, they mean that the included battery has about twice the life of comparable products. It provides a massive usage of 2 hours per charge and protects the device with a standard 5-minute shut-off feature. Which also preserves the battery at the same time. The Flowermate Aura can reach temperatures between 104°F to 446°F which is a rather wide range that the heating chamber can reach in 30-45 seconds. Moreover, it supports pass-through technology that allows charging when used, effectively giving it an infinite life. Plus, it charges quickly with the included USB-charger or any similar micro-USB cable.

The Flowermate Aura is a device designed to provide maximum value over luxury or fancy features you might never use. It utilizes a plastic housing, but you are never under the impression that the product you’re using is cheap.

Take a short break to look at Vapornation video of the Flowermate Aura. You can see the durable construction and sleek design of the device up close and personal in this video.

The Flowermate Aura is an excellent device for those who want to vaporize with minimal risk of being caught. It is fantastic that Flowermate was able to fit in all of the present features. It has long battery life and heats up very quickly with a wide temperature range. When you add in the portable “tank” functionality, the under 100 price tag starts to seem inexpensive. There are some hang-ups present. However, you should expect this device to get a little uncomfortable with extended use. Still, as a solo vape, it has little to improve.

UK Based | Free Next Day Shipping